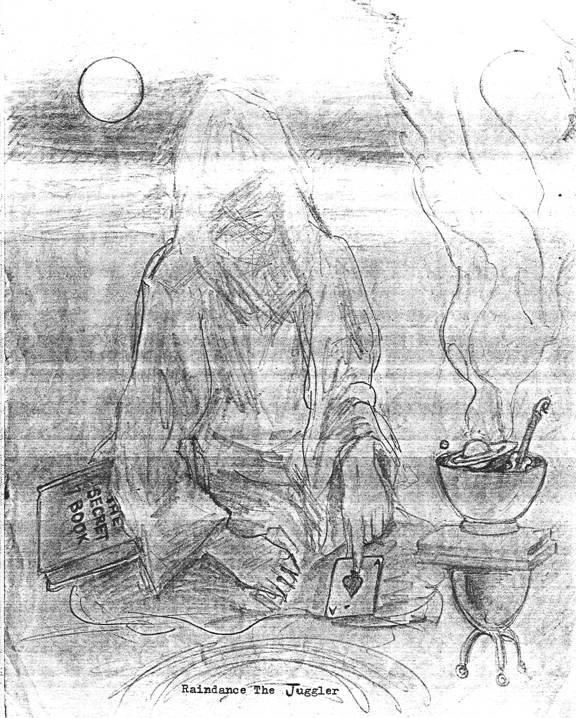 The Raindance family tell their story in tales, through poetry, songs, art, and dance.

Acts and Scene descriptions in development

Here are some  EXCERPTS from the play

Once upon a time there was a true rainmaker. His name is Charles Mallory Hatfield. In southern California in the early 1900s, there was a great drought. Charles was a pioneering meteorologist and a man with strange inventions. One was a "humidity accelerator" that, according to him, could make it rain. In Oceanside, California, he went to the top of the tallest towers and mixed high-smelling fetid chemicals, and in five days it rained an inch of rain all over the city. Hatfield the Rainmaker's fame spread. In 1916, the San Diego city council, desperate for the rain, agreed to pay Hatfield $ 10,000, a huge sum of money later, if he could fill the local reservoir tanks. He mixed his chemicals on tall towers and soon it started to rain, and it rained, rained, and rained. The reservoirs overflowed and the rain flooded the streets, houses, businesses and the entire city. When it finally stopped raining, Hatfield stopped by the town hall offices to collect his "rain check." The council refused to pay. They said they hired Hatfield to fill the reservoirs only, not to flood the city.

The rain that we seek through the dance is the rain and the wind of the Spirit, which is followed by the rainbows that follow us. 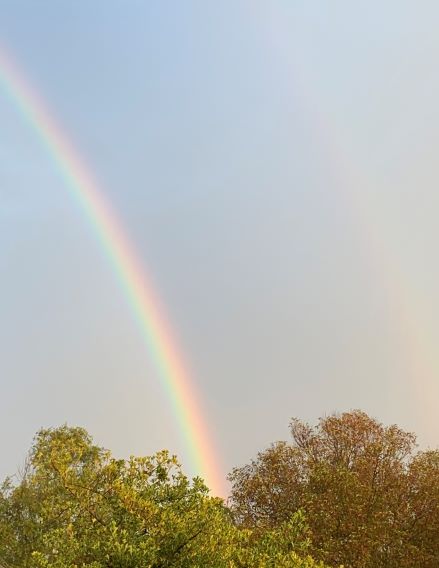 Call me in the morning of the rainbow

How many days left till I die

From drinking whiskey and getting high

I'm a rambler by trade travelling about

Wind at my back circling south

Buried some words deep in the sand

Sit with the sun setting by the moon

With your favorite color of a flower in bloom

Count all the hours and sing all the tunes

For the treasure sierra isn't buried in ground

It's not stuck in time & bound to be found

Then for but a moment as that too must pass

For the river immortal inside us shall last

Faith in the future you can't deny

There's something more here than you can explain

Wipe away the tear yes you'll get by

And call me in the morning of the rainbow rain

Call me in the morning of the rainbow

She still attracts a crowd

who all cry out at her & stare

get drunk and laugh out loud

The old timers cheer at the sight of

Liberty on the back of a terrapin

We were at the carnival fair

and noted when the times were so good

We climbed the stone stairs past the turn in the street

where we recalled our childhood

We ran into Ida Red & the queen of the magazine

among the crowd and smoke

the endless noise and scenes

Freya Chanteur sings with the band

She holds a tarantula painted on a rouge-colored fan

and with  a wave of her hand

sees the face of Jesse in the crowd

and cries with her eyes clear and loud

She falls in love with his gentle stare

Time passes through his fingers in her hair

In a public act of loyal tradition

she marries the gypsy on a terrapin

We went to the Tally-Ho tavern

to see a fiddler's contest held there

We were amused by this unusual lady &

knocked out by the perfume in the air

We watched from the window the wanderin' and weary

in their chameleon webs in the thick of night

In the distance there is the faint sound of misty bells

while they visit the world through slits of their shells

I'd like you to meet pretty Peggy the mysterious lady

She comes from eastern Europe

Her father's an investor

She's got some money & knows what she's after

She plays in the pool parlor in Breakfast Alley

One night she drove Michelle & me & Liberty

out to the valley &

led us to a hermit's cave

where he lit a lantern played guitar and sang

It's gotta be all or nothing at all babe

His hands are as cold as ice

yet I can see sweat pour from his brow

I look at the lines on his face

He survived an ordeal he wouldn't tell now

We were drinking wine on Alligator Mountain

I expressed love greater than mine

and he turned to me in perfect mime

My heart is an open book to you

Red sails in the sunset are overlooking you

You better know what you're doing

He's been on live stages and what he practiced was kind

He knew fugitives and sages & found few of similar mind

and breaks the cages of ephemeral walls to find

There's a voice deep inside of the ancient one calling you

The door's not marked but the light shines through

He was drinking and smoking heavy & Johnnie was popping pills.

He heard the wear in his old friend´s voice.

Emotions were stirred echoing his words.

I´ve been shaken and frozen inside,

I been lost in a sound surrounded and found.

Alone on the desert sand.

Persevering for the day

For a United States company.

Owed so many bills causing our countrymen´s ills,

I have to pay so I must sell the story.

Though they work through a sweat,

So I dug out a book of history.

You could see it repeat itself,

Down from the shelf,

Brought back a picture in my memory.

I was at a reunion and sang a lullaby.

They wanted to discuss modern times.

We went down to the pier with our fishing line

Recalling the gig at the time.

Harry Jardiniere is host and with his half tank of gas,

Hums his harp dancing with the light glistening through his glass.

Someone buy two rounds & I´ll drink a toast to old Jim Bridger and to the band in the arena,

Where flower girls smile with their eyes at those passing by &

My lady Maria Bonita the Senorita,

She bathes in the soft moonlight &

Turns me away from the Margaritas,

Awakens and soaks up the sun in the shamrocks beneath her.

No one could catch or match such

Succession of impressions in progression.

There was a wolf´s head in the passageway

With ringers on his fingers, muscles on his arms &

His songs played on the loudspeakers,

With the crickets in tune under the moon.

There were beautiful women, with purses, that would sway and swoon.

Drinking up the time,

Waiting and juiced, ready and able,

They´re funny with an interesting line.

It seems you can´t please everyone

& you don´t want to antagonize;

Everybody´s got so much to say

They could say better with their eyes.

There are four queens in every deck,

Four kings in every scene,

Four jacks in the right places.

The cost they share makes them feel bright blue.

If he had the chance, he´d make his dream come true.

No brazen anger, no nightmare trance,

No need to be strangers between the song and the dance.

Make it rain a worthy treasure

For our dancing pleasure.

One Christmas eve I remember well.

Johnnie Walker called from his hotel.

It sure is hot here in Mexico &

I used to spend Christmas as a family man;

Now I´m alone & on the edge of being a hollow man.

Paid the price of time,

And played a rhapsody in the rain

To this old heart of mine.

excepts from the play Raindance

With the distant stars far up above

And got it together to build a ship

And get all his friends together for the trip

One lone dreamer came on by

Said "Mississippi Captain, how high is the sky?

I always had hopes to travel into space

And find new direction for the human race"

Well they got together and made a plan

To find another planet with air water and land

And in one swift stroke find the solution

To the cost of living with climate pollution

ALL MATERIAL IN THIS SITE PROTECTED BY: THE DIGITAL MILLENNIUM COPYRIGHT ACT, THE COPYRIGHT LAW OF THE U.S.A. AND BY INTERNATIONAL TREATY PROVISIONS. ALL RIGHTS RESERVED.