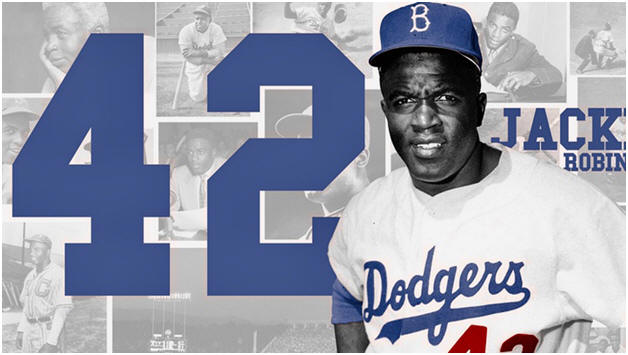 "A life is not important, except in the impact it has on other lives."

He never asked to be a hero
For him, playing ball would be just fine
Potentially his chance was less than zero
To overcome that black-white racist line

Unlike Duke, Dimag and Mickey
Jackie entered through back doors
The stage was set by Mr. Rickey
For Robinson to fight that Civil War

Sports, they say, mirrors society
So, they should have hung their heads in shame
For what was then America’s propriety
Brought prejudice to every game

The Brooklyn Bums, at long last, found salvation
When Robinson’s talents were revealed
With the awesome double-play combination
Reese and Jackie brought to Ebbetts Field

For Jackie, baseball was more than just a game
He opened doors for Campy, Mays and others
Number 42, now in the Hall of Fame
Proved men of all colors could play in life as brothers

He never asked to be a hero! 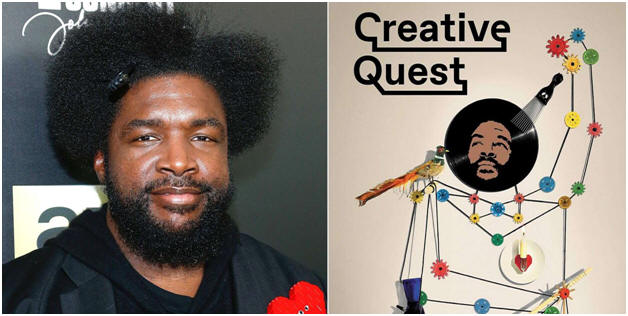 created around an epic event that celebrated Black history,

culture and fashion, around six weeks in the summer of 1969.

Music to satisfy the soul! 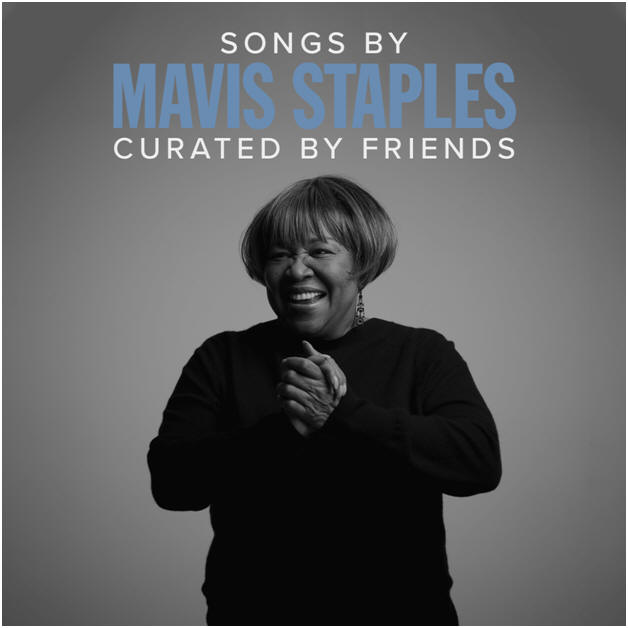 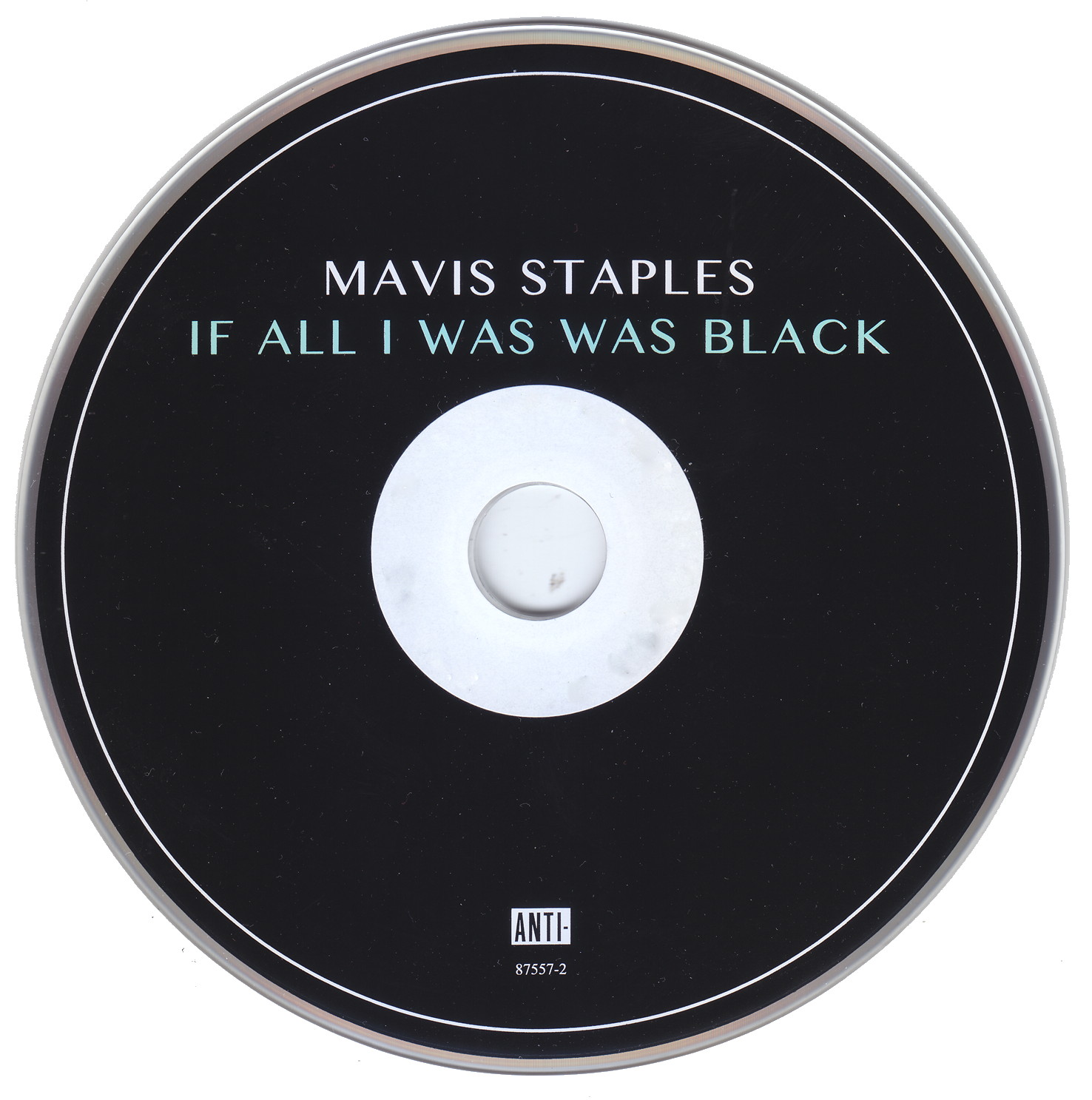 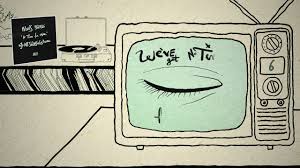 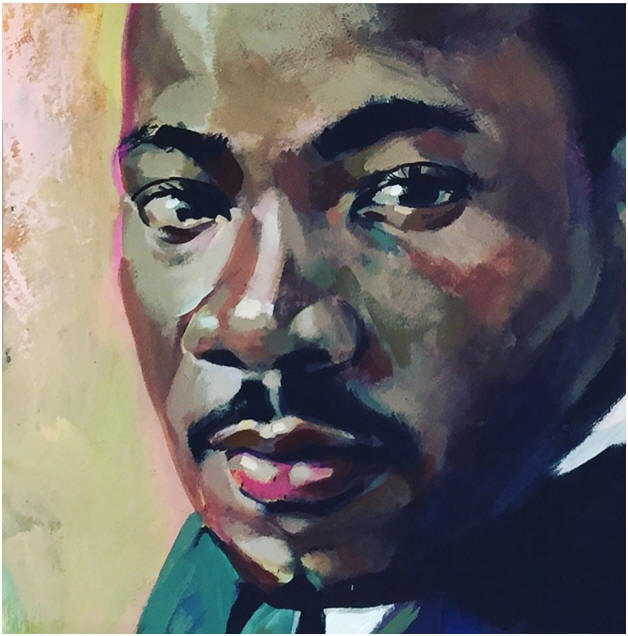 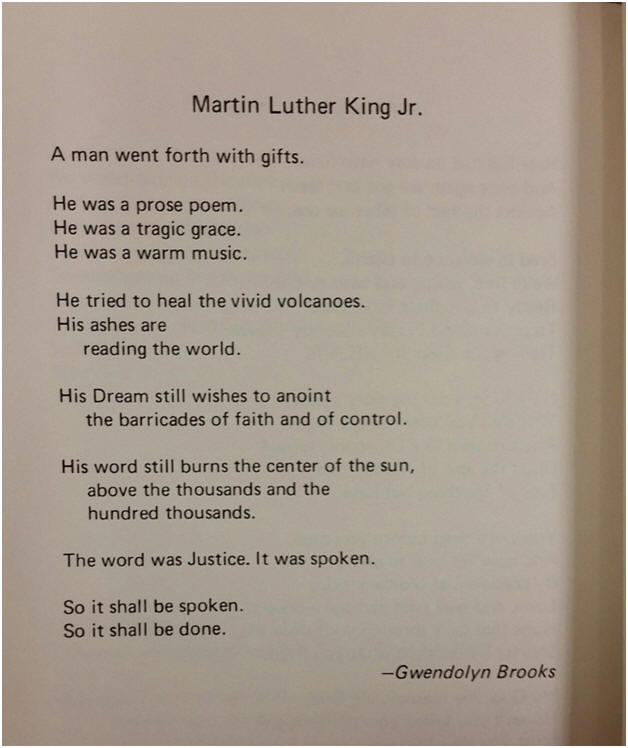 Both these poets had an influential impact on me in college & their work inspired me to become a poet, teacher and writer.

I corresponded with Gwendolyn Brooks when I was an undergraduate student at Bensalem college (Fordham University) and while in a Master's program at Goddard college. She was poet laureate of Illinois.

First African American to receive the Pulitzer Prize (for Poetry, 1950)

I, too, sing America.

I am the darker brother. They send me to eat in the kitchen When company comes, But I laugh, And eat well, And grow strong.

Tomorrow, I’ll be at the table When company comes. Nobody’ll dare Say to me, “Eat in the kitchen,” Then.

Besides, They’ll see how beautiful I am And be ashamed— 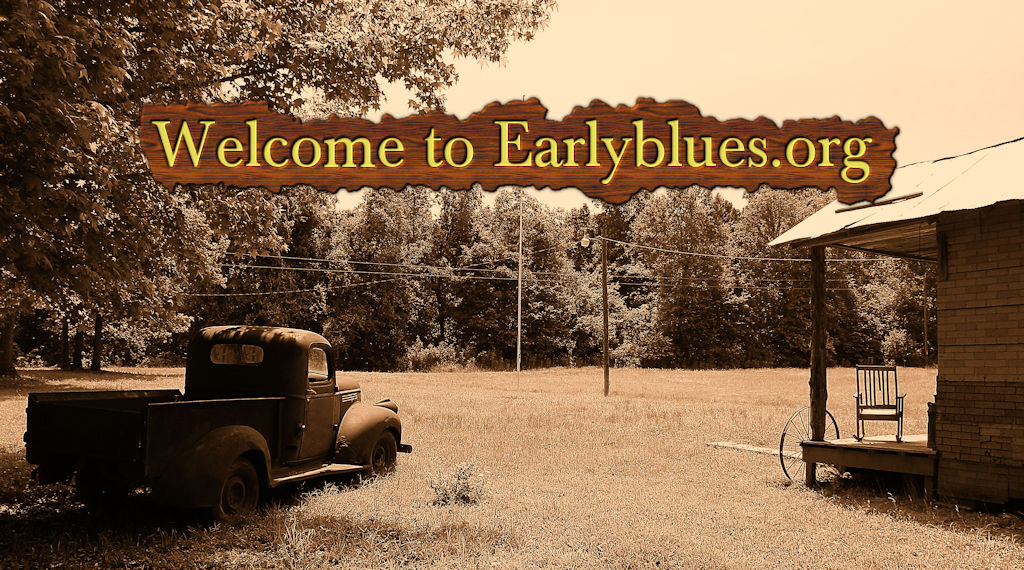 Langston Hughes is the poet laureate of African-American experience — a popular writer of the Harlem Renaissance who gave hopeful expression to the aspirations of the oppressed, even as he decried racism and injustice. In addition to poetry, he published fiction, drama, autobiography, and translations. His work continues to serve as a model of wide empathy and social commitment.

See More By This Poet

The Blues and Jazz Poetry of Langston Hughes

A Personal Appreciation By Ray Smith

Langston Hughes’s first published poem, ‘The Negro Speaks of Rivers’, was in a 1921 issue of The Crisis magazine. This was to become one of his most famous poems, later appearing in Brownie’s Book and he included it in his first book of poetry, The Weary Blues in 1926.

The Negro Speaks of Rivers

I bathed in the Euphrates when dawns were young.
I danced in the Nile when I was old.
I built my hut near the Congo and it lulled me to sleep.
I looked upon the Nile and raised the pyramids above it.
I heard the singing of the Mississippi when Abe Lincoln
went down to New Orleans, and I’ve seen it’s muddy
bosom turn all golden in the sunset. 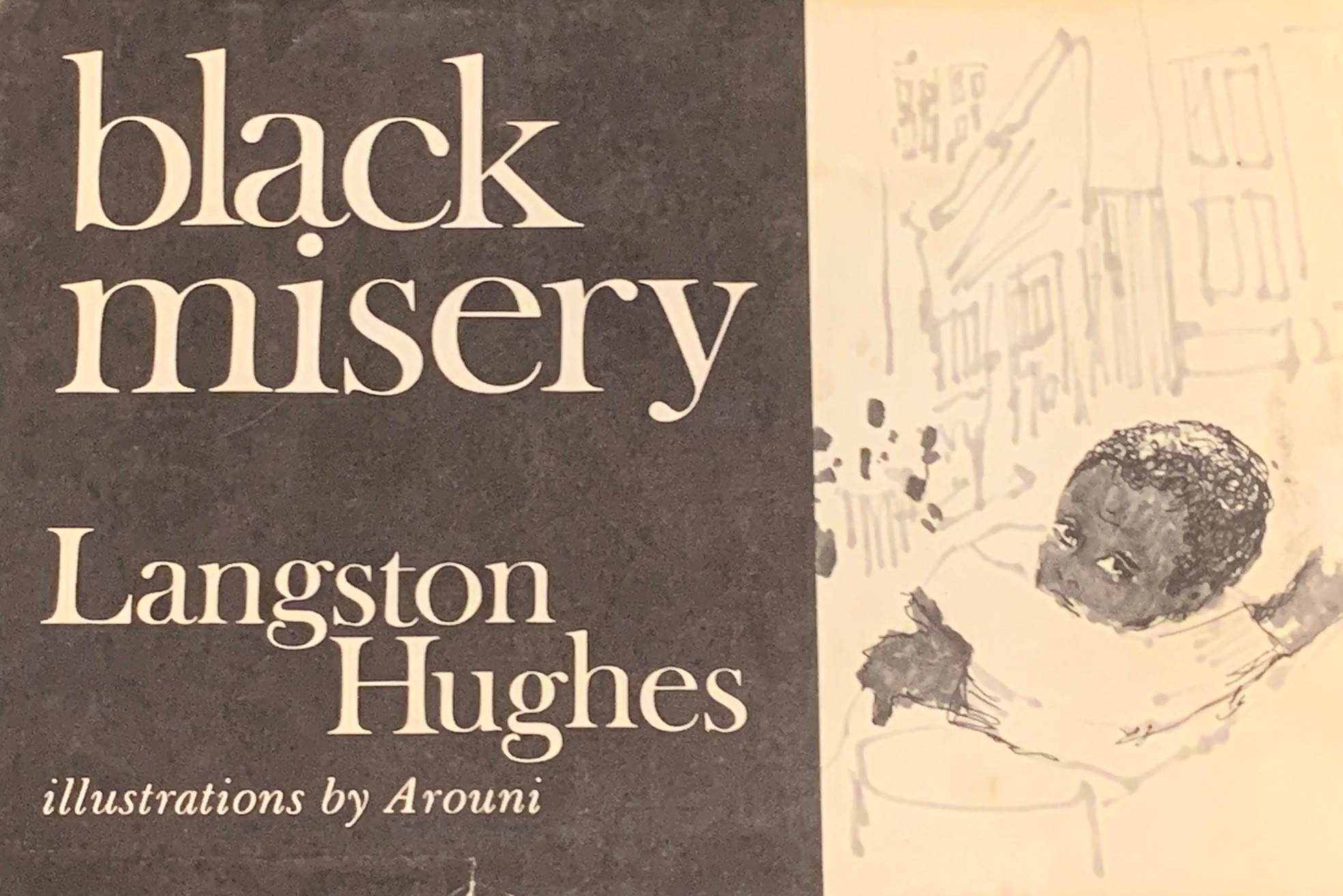 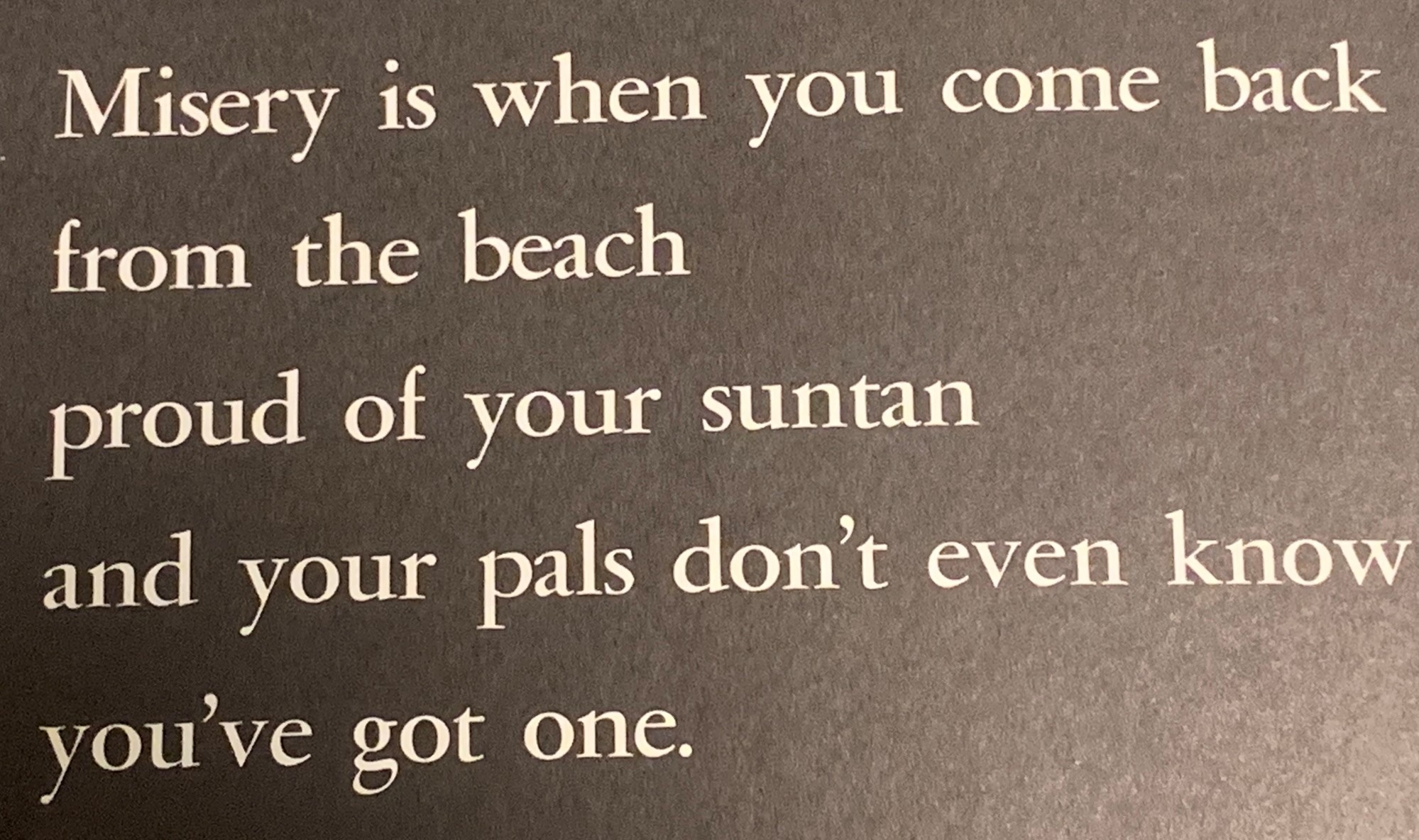 "I Dream A World"

I dream a world where man
No other man will scorn, Where love will bless the earth And peace its paths adorn I dream a world where all Will know sweet freedom's way, Where greed no longer saps the soul Nor avarice blights our day. A world I dream where black or white, Whatever race you be, Will share the bounties of the earth And every man is free, Where wretchedness will hang its head And joy, like a pearl, Attends the needs of all mankind- Of such I dream, my world!

Born January 15, 1929, in Atlanta, Georgia, Dr. Martin Luther King, Jr. is known as one of the most important figures of movements that centered the rights of Black folks in America. A lesser known fact about Dr. King is that he was friends with and deeply influenced by the poetry of Langston Hughes. Similarly, Hughes wrote poetry about King’s work. Hughes’s influence on King was so profound that traces of his poetry have been identified in some of Dr. King’s most important speeches. Some poignant examples are King referring to himself as the "victim of deferred dreams" in  "A Christmas Sermon for Peace," and affirming "Life for none of us has been a crystal stair" at Montgomery, Alabama's Holt Street Baptist Church in November 1956. Both derive from Hughes's poems, "Harlem" and "Mother to Son."

BLACKSTEW is a news media platform that gives a fresh and meaningful perspective on the Black news, culture, and art that matters to the African diaspora.

Submissions are now open for the 2022 Cave Canem Poetry Prize, to be judged by Willie Perdomo. The annual contest is dedicated to the discovery of first books by Black poets. The winner receives $1,000, publication by University of Georgia Press in fall 2023, 15 copies of the book, and a feature reading. Both the winner and runner-up will be invited to individual critique sessions with the final judge. Black poets who have not had a full-length book of poetry published by a professional press are encouraged to apply by January 31. The contest is free to enter. Complete details and submission guidelines may be found here.

Willie Perdomo is the author of Smoking Lovely: The Remix (Haymarket Books, 2021), The Crazy Bunch (Penguin Random House, 2019), The Essential Hits of Shorty Bon Bon (Penguin Random House, 2014), and Where a Nickel Costs of Dime (Norton, 1996). Winner of the Foundation for Contemporary Arts Cy Twombly Award for Poetry, the New York City Book Award in Poetry, and the PEN Open Book Award, Perdomo was also a finalist for the National Book Critics Circle Award, and the Poetry Society of America Norma Farber First Book Award.  He is co-editor of the anthology, Latínext, and his work has appeared in The New York Times Magazine, Poetry, Washington Post, The Best American Poetry 2019, and African Voices. He is currently a Lucas Arts Literary Fellow, a core faculty member at VONA/Voices of our Nation Writing Workshop, and teaches at Phillips Exeter Academy. 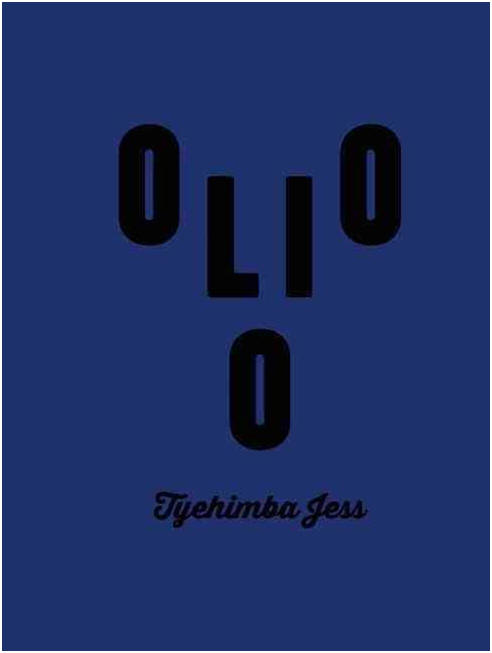 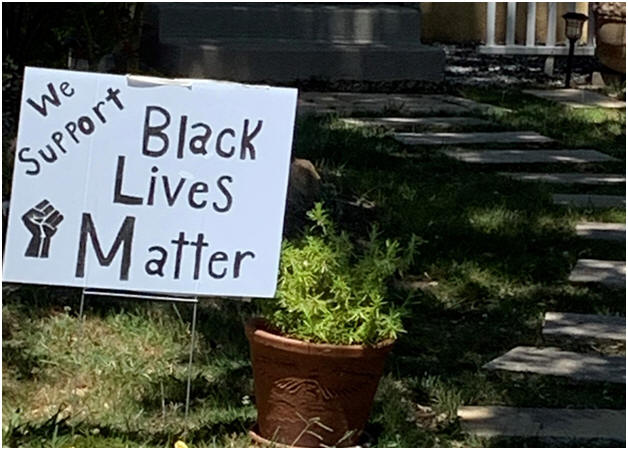 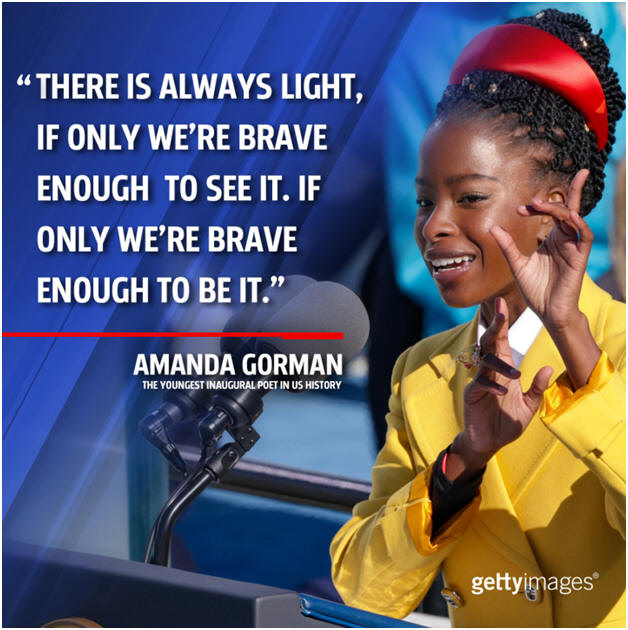 reads a poem "The Hill We Climb" at Joe Biden's Presidential inauguration.

THE HILL WE CLIMB

(America never was America to me.)

Let America be the dream the dreamers dreamed—
Let it be that great strong land of love
Where never kings connive nor tyrants scheme
That any man be crushed by one above.

(It never was America to me.)

O, let my land be a land where Liberty
Is crowned with no false patriotic wreath,
But opportunity is real, and life is free,
Equality is in the air we breathe.


(There's never been equality for me,
Nor freedom in this "homeland of the free.")

Who said the free? Not me?

O, let America be America again—
The land that never has been yet—
And yet must be—the land where every man is free.
The land that's mine—the poor man's, Indian's, Negro's, ME—
Who made America,
Whose sweat and blood, whose faith and pain,
Whose hand at the foundry, whose plow in the rain,
Must bring back our mighty dream again.

Sure, call me any ugly name you choose—
The steel of freedom does not stain.
From those who live like leeches on the people's lives,
We must take back our land again,
America!

O, yes,
I say it plain,
America never was America to me,
And yet I swear this oath—
America will be!

Out of the rack and ruin of our gangster death,
The rape and rot of graft, and stealth, and lies,
We, the people, must redeem
The land, the mines, the plants, the rivers.
The mountains and the endless plain—
All, all the stretch of these great green states—
And make America again!
C

You may write me down in history With your bitter, twisted lies, You may trod me in the very dirt But still, like dust, I’ll rise.

Does my sassiness upset you? Why are you beset with gloom? ’Cause I walk like I’ve got oil wells Pumping in my living room. Just like moons and like suns, With the certainty of tides, Just like hopes springing high, Still I’ll rise.

Did you want to see me broken? Bowed head and lowered eyes? Shoulders falling down like teardrops, Weakened by my soulful cries?

Does my haughtiness offend you? Don’t you take it awful hard ’Cause I laugh like I’ve got gold mines Diggin’ in my own backyard.

Does my sexiness upset you? Does it come as a surprise That I dance like I’ve got diamonds At the meeting of my thighs?

Out of the huts of history’s shame I rise Up from a past that’s rooted in pain I rise I’m a black ocean, leaping and wide, Welling and swelling I bear in the tide.

Leaving behind nights of terror and fear I rise Into a daybreak that’s wondrously clear I rise Bringing the gifts that my ancestors gave, I am the dream and the hope of the slave. I rise I rise I rise. 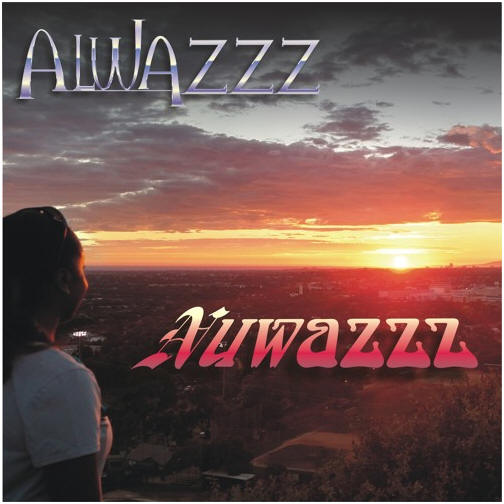 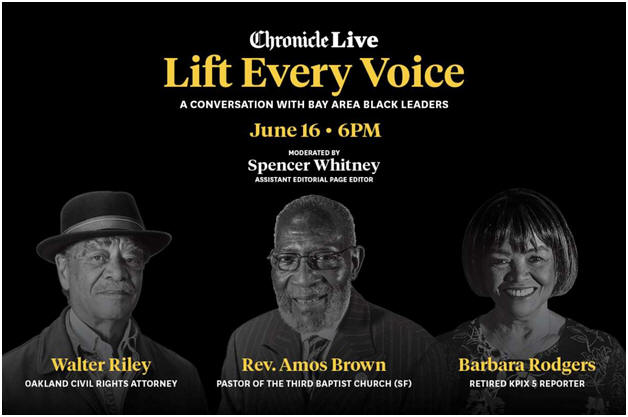 Lift Every Voice, a project connecting young Black journalists with Black Americans 75 and older to celebrate and learn from their life experiences — deepening connections with the past to position us all for a better future.